The first problem with non-working hotkeys was noticed in version 14.04. But in it she had a slightly different character. In Ubuntu 14.04, keyboard shortcuts did not work on the Cyrillic layout.

This problem with non-working hotkeys in Ubuntu 18.04 has a slightly different character. The fact is that the language switching is triggered precisely when the key combination is pressed ( Alt+Shift or Ctr+Shift ), which stops waiting for the next key to enter.

After a long search on the forums was found fixing the XOrg package for the correct operation of switching combinations and after it the very solution of the problem and .

PS . Faced the dump of this feature. I had to install gnome-tweaks .

Remove Alt+Shift alternative switch and set to another combination. 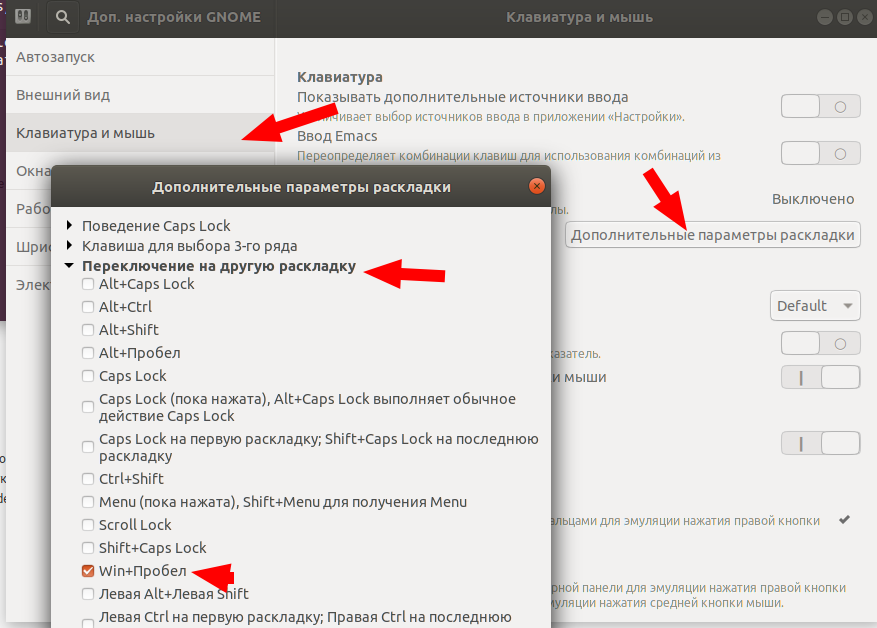 Other articles from the category

Let's consider the possibility of changing the parameters of the configuration file (php.ini) on a hosting that does not have the ability to configure the Cron scheduler (cli) from the panel.

Configuring Apache for high volume Cookies. Let's analyze the error "Bad Request. Your browser sent a request that this server could not understand. Size of a request header field exceeds server limit." and options to configure the server.

USB not working after Ubuntu 18.04 update on laptop

When USB 2.0-3.0 stopped working after updating Ubuntu on a laptop.

Let's consider one of the ways to dos-attack on bluetooth through the basic l2ping tools in linux. Let's analyze a simple python script.

Consider a script that saves e-mail to a file. Sendmail stub, setup in Ubuntu.

Let's analyze one of the reasons for the initramfs error when starting Linux Ubuntu 18.04. Let's try a system restore. fsck exited with status code 4.